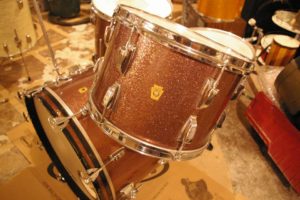 With the popularity of Facebook–for the world, including me–I’ve been neglecting my blog. I suppose not so much neglecting it, as choosing not to use it. Things published on Facebook get to my 600+ friends. Things published here get seen by very few. Of course, what’s published here is available to the world, and not just my “friends.” Some things I’d like to say may be very helpful to the right people, and that audience is probably not on my friends list. Specifically, I’ve been getting back into drumming. I never got away from it; I’ve been playing for the 4+ years I’ve been relatively silent here. But for the last year or so, I’ve been doing some fairly serious practicing. And some of what I’ve been learning and working on may help other drummers–and a drummer in Ontario looking for a Stick Control practice regimen won’t find my routine on Facebook; but they could find me here.

Also, I sometimes like the history of myself, and sometimes like to review it and remember. The Facebook archiving “feature” (if you could even call it that) stinks. Want to find out what you were doing in the fall of 2013 while it’s January 2016? Good luck finding that on Facebook.