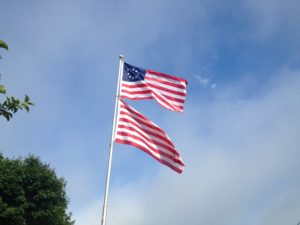 When I bought Spruce Head House, I wanted to continue the flag flying tradition of my father. His father had a flag pole, and I suppose that’s why he had one installed on his property. As I was looking for secondary flags to fly with Ol’ Glory, I happened upon the Sons of Liberty flag. Most of what they stood for seemed to fit with the political leanings of me and wife, and so I bought “her” a Sons of Liberty flag as a gift.

In reality, one might consider The Sons a group of toughs; a gang. While they were a gang for liberty, and so are generally accepted as patriots, their methods were pretty strong arm. The Boston Tea Party was a Sons stunt. Tarring and feathering was done, as well as general beating of someone Brit loyalist who dared cross paths with them. So while I might not agree with their tactics, I agree with their ideals. For those reasons, the Rebellious Stripes fly over downtown Spruce Head America today.