I dreamed I was in a vehicle that was rolling in reverse, and I had no breaks. I had to navigate through some streets and try to figure out a place to crash. I ended up crashing into a beat up old pick up. Sadly, I had cross the border from Canada into the United States during the trip, so I had to go through customs in the clear my possessions. I happened to have a rosewood snare drum with me, and imported rosewood is now illegal (at least in my dream). Thankfully the agent had a poster showing what rosewood snare drums were vintage and would be allowed in, and my snare drum was on the poster, so I knew I would be safe. 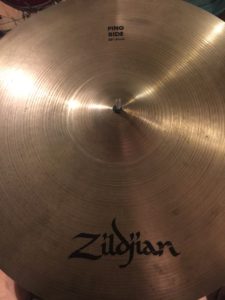 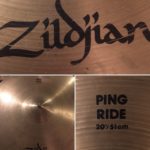 My very first real drum set was purchased at Northern Kingdom Music, probably 1984 or so. For the last 35-ish years, I’ve done business with my local music shop. Northern Kingdom closed up a few years ago, but a couple of the employees picked up the mantle and opened K2 Music. Midcoast Maine continued to have a local music store through the line of NKM. Until yesterday. Yesterday K2 Music closed, and with it an era. I’m without a local music store. The closest one is now an hour away.

I’ve decided I want to highlight some stories, and show off some gear I purchased from NKM and K2 over the years. What musician doesn’t like talking gear?

This cymbal is a 16″ Zildjian thin crash. It’s the first professional cymbal I ever purchased, and I got it from NKM. I have a video of me playing a battle of the bands as a freshman in high school. In that video I was playing this cymbal. On a side note, in that video I’m playing a borrowed ride cymbal; I didn’t own my own ride at the time. Anyway, this crash is still in my possession, and currently is on a stand at my practice kit down in the teaching studio as I write.